Living Voices was founded in 1982 by Blossom Mendonca. Under her dynamic guidance the choir received the First Prize in its debut performance at an All-Mumbai competition, and later went on to win the ‘Chubb Rotating Trophy and the Dr. & Mrs. L. D’Souza Trophy’ at the Festival of Festive Music in 1984 . They have also been presented with an award for maximum participation at this Festival in 2008.

The choir performed its first major opus with the Bombay Chamber Orchestra in 1987 under the baton of Blossom Mendonca. Major works with the Bombay Chamber Orchestra include Messa di Gloria by Puccini, Coronation Mass by Mozart, Polyvotsienne Dances by Borodin, etc.  They performed ‘Adiemus’ and Songs of the Sanctuary with the Symphony Orchestra of India conducted by the composer, Karl Jenkins. They later performed The Armed Man – A Mass for Peace by the same composer.  The choir is versatile and their choral concerts include Gregorian, Spirituals, Folk Songs, Modern, Contemporary, Popular, Jazz etc. They participated in the SOI season of the operas Cavaleria Rusticana and I Pagliacci and the celebrated Carmina Burana by Carl Orff and premiered Karl Jenkin’s “The Universe” in 2017 with the SOI.

The choir has received accolades from guest conductors and press alike. Their motto is to live…. to love….. to sing…. A passion for excellence in a relaxed atmosphere is the hallmark of their rehearsals.

“ a full-bodied, lustrous sound rose from the choir…..”
“The ‘Gloria’ opened like a flash of lightning and the final chorus was a blaze of light”
The Sunday Observer

“The Dances finally worked up to an overwhelming climax, getting the audience to its feet- it was a most creditable performance by both choir and orchestra.”
Afternoon Despatch and Courier

“Living Voices, conducted by Blossom Mendonca, its founder, treated us to a great variety of songs of every style and genre, testimony to it’s versatility……
the spiritual, ‘Ezekiel  Saw de Wheel’, was a virtuoso performance.”
The  Examiner 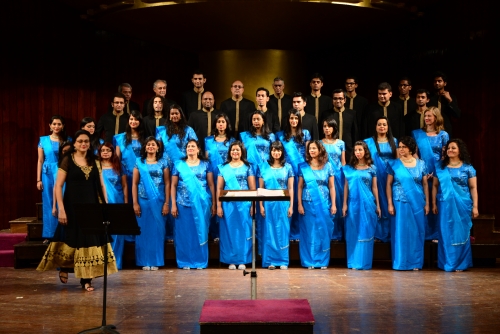