“a world-class ensemble”
- The Spectator


The Symphony Orchestra of India (SOI), based at the National Centre for the Performing Arts (NCPA), Mumbai, is India’s first and only professional orchestra. It was founded in 2006 by NCPA Chairman Khushroo N. Suntook and internationally-renowned violin virtuoso Marat Bisengaliev, who serves as the Orchestra’s Music Director. Zane Dalal was appointed Associate Music Director of the SOI in September 2014, following serving seven years as Resident Conductor.

International tours have seen the SOI perform in the Hall of Columns, Moscow; the Royal Opera House, Muscat; and the Emirates Palace Auditorium, Abu Dhabi, to open the 2015-16 Abu Dhabi Classics season. In January 2016, the SOI presented three sold-out concerts in Switzerland—at the Tonhalle, Zurich; Victoria Hall, Geneva; and the Tonhalle, St. Gallen—on invitation from the Migros Kulturprozent Classics series. Le Temps hailed “the commitment, the enthusiasm, and the discipline of this ensemble, which played with ferocious energy and appetite.” In February 2019, the SOI embarked on a six-concert tour to the United Kingdom, performing to delighted audiences in prestigious venues in London, Birmingham, Cardiff, Guildford, and Edinburgh, and garnering rave reviews. Apart from the mainstays of the symphonic repertoire, the NCPA and SOI have also presented large-scale productions including fully-staged operas. In 2017, the SOI premiered a highly-acclaimed, innovative new production of La Bohème, conducted by Carlo Rizzi, featuring an international star cast.

The Orchestra’s core group of musicians is resident at the NCPA all year round and forms the SOI Chamber Orchestra, performing a regular series of concerts through the year at the NCPA and at other venues around Mumbai and India. Additional players are recruited from a talented pool of professionals from around the world.

The Orchestra places great emphasis on education and many of the SOI musicians are also teachers, working to develop the musical potential amongst young people in India. Chief amongst the Orchestra’s educational initiatives is the SOI Music Academy which brings a professional level of teaching, previously not available in India, to gifted young musicians, with the aim of growing the number of Indian musicians in the SOI in the future. 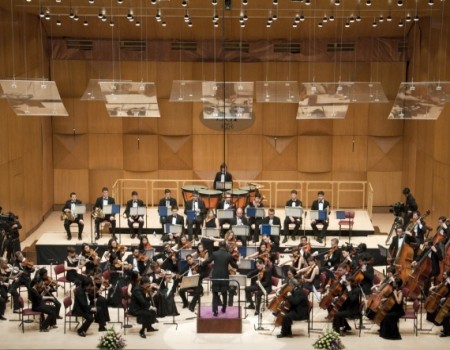