John Axelrod leads the Symphony Orchestra of India in a programme featuring the music of beloved Czech composer Antonín Dvořák, opening with his concert overture Othello and closing with his Seventh Symphony, often regarded by critics as his greatest. While composing this work, Dvořák wrote to a friend, “my new symphony must be such as to make a stir in the world”, and the Seventh certainly delivered. Flautist Adam Walker was appointed principal flute of the London Symphony Orchestra at the age of 29 and is at the forefront of a new generation of wind soloists. He makes his debut with the SOI to perform Mozart’s Flute Concerto No. 1.

This event runs approximately 100 minutes including one intermission.

Pre-concert talk by Dr. Cavas Bilimoria at 6:15 pm in the JBT Museum.

Season Discount:
Book your tickets between 6th to 11th January 2023 and avail a 15% discount for Friends of the SOI Discount code exclusively for Members for online booking.
Use Promo Code: NCPAM15 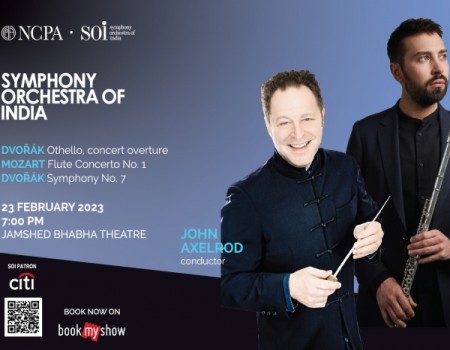