Symphony Orchestra of India: The Music of Sir Karl Jenkins

SOI Music Director Marat Bisengaliev leads this concert featuring the works of Sir Karl Jenkins, one of the world’s most performed living composers. The centrepiece of the programme is the India premiere of Requiem. In keeping with his trait of drawing from various cultures in his music, Sir Karl’s Requiem includes not only the traditional Latin text of the Requiem mass, but also five Japanese haikus, as well as instruments and musical elements from various musical traditions.

Marat Bisengaliev and Sir Karl Jenkins share a long relationship, and Requiem, like many of Sir Karl’s works, was premiered by Bisengaliev in 2005 in London.“I love the pure beauty & spirituality of Karl’s music; music without boundaries, loved by everyone and totally democratic,” says Marat.

This event runs approximately 110 minutes including one intermission.

Season Discount:
Book your tickets between 6th to 11th January 2023 and avail a 15% discount for Friends of the SOI Discount code exclusively for Members for online booking.
Use Promo Code: NCPAM15 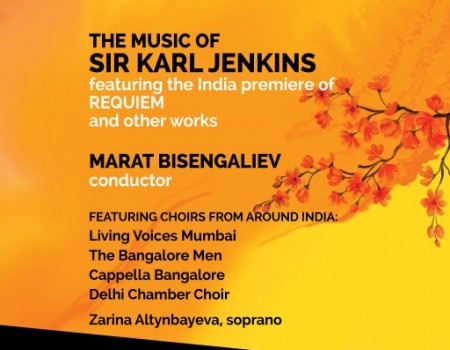